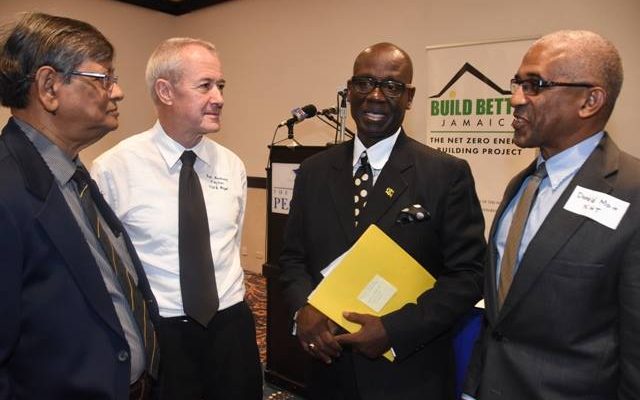 He was speaking at the second in a series of National Building Policy Workshops under the project being implemented by the Institute for Sustainability Development (ISD) of the University of the West Indies (UWI) with financial support of the Global Environment Facility (GEF) and technical assistance of the United Nation Environment Programme (UNEP).

Minister McKenzie said that he was “happy at the progress of the LGGE and looked forward to seeing the completed NZEB and hearing the new facts and ideas that will emerge from the policy workshop.”

“Your work is of vital importance and I endorse the continuing efforts of the Institute for Sustainable Development”, the Minister declare

He said that the LGGE has “embarked on a very important exercise, which is connected to critical national objectives being pursued by the Government of Jamaica – the authorized construction and use of buildings and the creation of environmentally sound and energy efficient buildings.”

“Both objectives are critical to the economic as well as social transformation of Jamaica and one does not have to be imaginative to understand the positive effect that energy efficient commercial and residential buildings all over Jamaica will have on personal incomes and on the national fuel bill.”

Similarly, the Minister said “the efficient regulation of building use is critical to economic growth, economic development and social order”.

Pointing to a new Building Bill 2017, he would begin piloting through the House of Representatives on June 6, 2017, Minister McKenzie said the timing of this workshop could not be better as many of the issues on the workshop programme are captured in the Bill which will “reflect new construction and environmental standards as they evolve.

The results of the discussions of your workshop about building policy may be facilitated through the Building Advisory Council established under section 75 of the Bill”, he assured the LGGE administrators.